An update on Cámara Chica, from our man (recently) in Havana

I’ve been back from Cuba for about two months now and it’s taken that long to process all that went on in the three weeks I was there. I am still not sure I understand fully what our time there represents, but something positive is definitely happening.

It was five years ago that we first went out to Cuba with the idea of setting up six media production centres in communities across the island. We wanted to avoid making just a token gesture by doing something only in Havana so we put real effort into securing centres in six very different provinces. Victorino in the Sierra Maestra has significance for three reasons – it was in a community of Campesino peasant farmers that still lived their lives much as their ancestors did long before the revolution – the Sierra Maestra is also where the revolution started and it was the most difficult community to get to; the road bridge had collapsed leaving the only access through a ford which, when it rained, became impassable – and believe me, when it rains in Cuba it REALLY rains.

In Victorino we were lucky enough to find the dynamo that is Pedro. He had previously worked with TV Serrana to document the traditional village life and his fierce pride in the Campesino tradition and its contemporary influence on Cuba’s identity remains the energy behind the film making groups there. 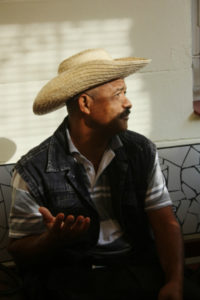 Pedro and his compañeros fear that the coming change to Cuban society as it opens up to the West will sweep away their pre-revolutionary traditions. We brought back many videos from Pedro after our second visit in 2014, including footage of the Campesino villages participating in various Santeria festivals, maintaining the traditional ways of the old African Yoruba religion from Benin and Togo, brought to the island with the slave ships centuries before.

Guantanamo too was an essential base for one of media hubs for obvious reasons. The people we met there were fiercely proud and headstrong.

They suffered no fools and despite anything we might suggest they knew their minds and knew exactly what they wanted to do and what kind of films they would make with their equipment. Connecting back with them this year was a delight-it’s great to see they are still making work five years later and with just that same
level of Latino sass.

In Havana we chose Muraleando, in the working class district of Lawton, a street transformed by artists and famous for its community-led arts centre built in a 17th century water tank. And our centre in Pinar Del Rio was once a key sugar-making town but the factory had long-closed. Juan Carlos, ex TV Cameraman,
joined us for the initial training but was highly sceptical of our claim that, with the right guidance, young people could both take on all the technical roles and the creative lead on a project. Of all our community leaders, Juan Carlos is now the project’s greatest champion and he has gone on to develop the network in Pinar on our behalf, bringing both Artemisa and Sandino into our orbit. Then, Santa Clara and Ciego de Avila, both in the centre of Cuba, completed our initial six centres. Did we know what would happen then? No. And even now I can’t say that, five years on, we yet know what will emerge from this network.

We’ve had conversations with Mexico, Peru, Argentina, Chile and Easter Island…they remain on our wishlist, but it was Venezuela that we next visited, setting up four centres in a country that had just fallen from great economic heights to its knees. We set up two centres in Caracas, a third high in the Andes and another in a coastal city with an indigenous community. It was tough to see how hard the economic collapse had hit the people there. We travelled everywhere in Caracas in an armoured car with an armed guard, pretty much forbidden from leaving the hotel in the evenings, but we met generous people, active in their communities, for whom resistance and street activism were central to their collective survival. In many ways, the centres we worked with in Caracas reminded me of the squat art clubs in the UK I’d visited and worked in during the eighties and nineties. Ksa la Mink’a in Caracas occupied an old screen-printing works – they had alternative medicines growing on their roof terrace. The 6 colour screenprint machines they owned were dormant but ripe for art as social intervention. I sent them images of the Bristol Pound when I got home and
suggested maybe with their screenprinting technology they could establish a community currency to circumvent some of the privations they were facing with inflation as 9,000%. I stay in touch with many of the participants there but right now its clear they have much more important things to worry about.

By 2017 there was an undeniable buzz in Cuba – all of the groups there had featured on Cuba TV, and some of the work was now developing an international profile. Certainly the project itself had attracted attention in academic circles. But the equipment we’d originally given them was now at the end of its useful life and trying to re-equip the six original Cuban centres and establish four new ones had become problematic – the Ministry of Culture had some misgivings – the National Director for Community Education was sceptical of our project and possibly our intentions; why exactly were we so keen to place the tools of mass communication in the hands of Cuban children? It took some persuading, but finally they let us return and they shadowed us during the initial training of the community leaders in Havana and then through the first workshops within the communities. So now, as of 2018 we have four new centres to add to our growing list – in Gibara (in the Province of Holguin), Cardenas (Matanzas), Guira (Artemisa) and Sandino (Pinar del Rio).

What turned the National Director around was witnessing the project at work, and seeing that the focus for us wasn’t on stirring dissent as they feared but to empower good citizenship; to give voice to young people as the community’s future leaders, helping them to understand how media works, how editing can manipulate opinion and how media can certainly identify problems but, more importantly, it can propose solutions and rally the community to make positive social change. The National Director saw how the project developed a team spirit in the young people and a sense of social responsibility, encouraging them to work together in a democratic manner with mutual respect. And I guess it’s important to say at this stage that our whole working model is based on the idea that the young people don’t need to be led but facilitated; ours is a light touch approach – less of a teacher/pupil relationship and more of a team dynamic in which we solve problems together by sharing ideas and knowledge.

The National Director for Community Education came to see our project as a potential answer to a problem she faced; the need to prepare Cuba’s young people for the coming digital revolution by equipping them with media literacy skills. She could see that was central to our message and her support now has opened up permissions to work in the network she manages of 400 community education centres across Cuba.

We have no idea at this time how we will rise to that challenge but conversations continue in the background, as it’s now not just Cuba; other countries across the world are asking; how do we become part of this Cámara Chica network?